The first KABA-GA gathering was informal and occurred in May 2012 on the rooftop of Nelson Mullins in Atlanta (below).  June Jeong-Hwa Lee, a partner there, summoned the handful of Korean-American attorneys she knew and asked them to each invite others.

KABA-GA was officially formed on August 28, 2012 when, with assistance from Steve Park (Ballard Spahr) and Alex Shin (Nelson Mullins), it filed articles of incorporation with the Secretary of State.

More members joined after the Daily Report featured KABA-GA's formation on September 26, 2012 (left) and the newly-formed membership committee scoured the Georgia Bar Directory and Korean language newspapers for others during a late-night dinner at SoKongDong. 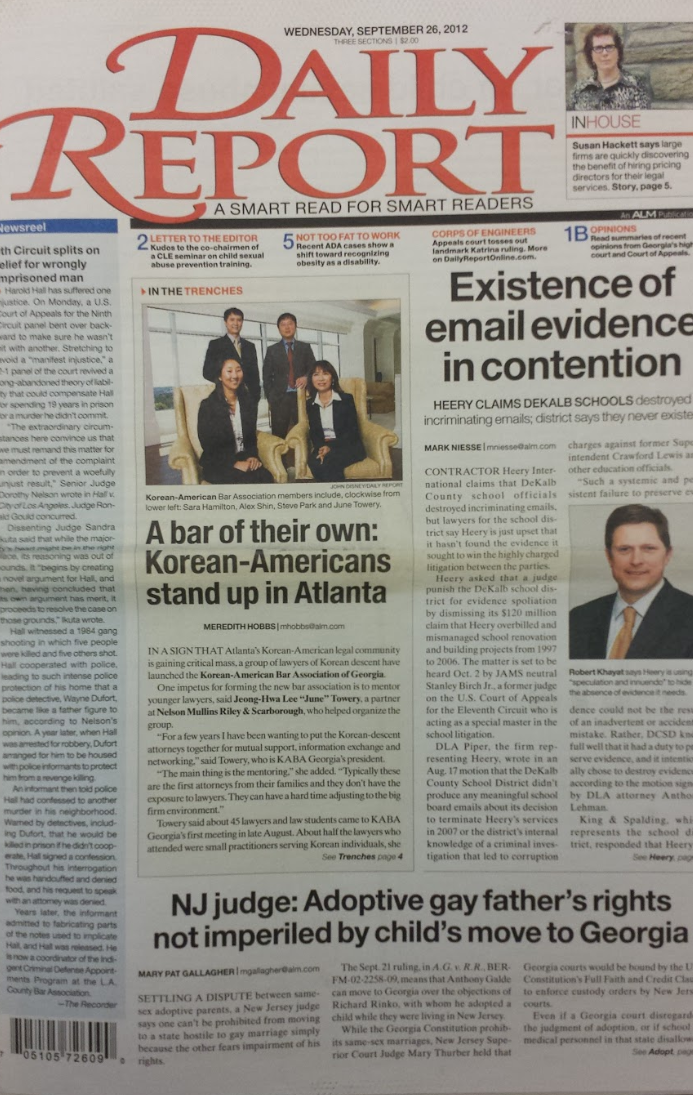 In the first few years, KABA-GA was funded primarily by Board Members individually with support from their firms.  Early events focused on mentoring young lawyers and law students, and providing a friendly atmosphere where members could connect.

Though KABA-GA had around 50 members its first few year, the organization's profile increased substantially from 2013 when Bonnie Youn (The RMN Agency) contributed her social media skills to build out KABA-GA's online presence.

In 2018, KABA-GA hosted the conference for the International Association of Korean Lawyers for the first time in Atlanta, GA.  The conference brought together over 400 lawyers of Korean descent from more than a dozen countries.

In 2019, the solo and small firm committee (SSF) formed under the leadership of Jason Park (Jason Park Law) and Eun Young Park (Park Law Group).  The SSF has continued KABA-GA's growth by connecting attorneys in Gwinnett County and elsewhere, and beginning a series of legal seminars which hundreds of community members have attended.

Today, we have approximately 200 dues-paying members and one of the largest compilation of lawyers of Korean descent in the U.S.

Membership Dues  | Payments: If you are not paying online and are mailing a CHECK, please see our CONTACTS PAGE